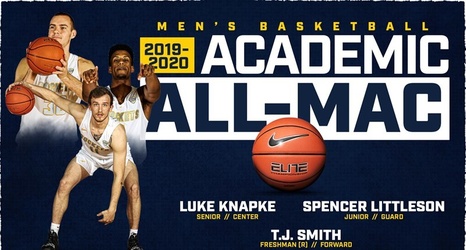 CLEVELAND, Ohio – Senior Luke Knapke (Maria Stein, Ohio), junior Spencer Littleson (Rochester, Mich.) and redshirt freshman T.J. Smith (Matteson, Ill.) have been named to the 2019-20 Academic All-Mid-American Conference Team, the league announced on Wednesday. The Rockets ranked second in the MAC with three honorees out of a total of 14 student-athletes honored in the league.

Knapke was selected to the academic team for a school-record fourth time, while Littleson was honored for a second occasion. Smith earned a spot on the league's academic squad for the first time.

Knapke, who possesses a 3.