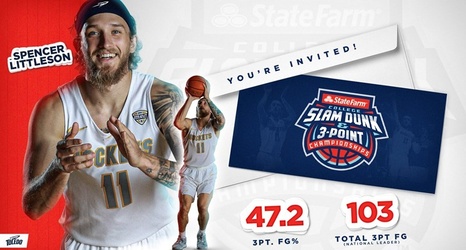 Indianapolis, Ind. – University of Toledo senior Spencer Littleson has been selected to the Men's 3-Point Championship roster for the 32nd annual State Farm College Slam Dunk & 3-Point Championships at Hinkle Fieldhouse on the Butler University campus in Indianapolis on Thursday, April 1. Littleson is one of eight players selected for the event that will air live on ESPN2 at 9:00 p.m. ET.

Littleson leads the nation with 103 three-point field goals and ranks second nationally with a 47.2 three-point FG%. The Rochester Hills, Mich. native earned second-team All-MAC and MAC All-Defensive Team honors this past season while leading the Rockets to a 21-9 overall record and the Mid-American Conference championship.