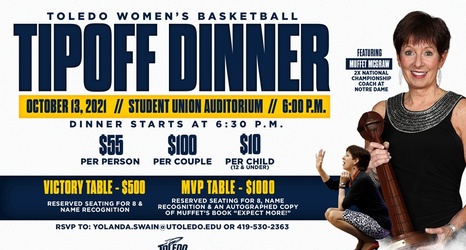 TOLEDO, Ohio – The University of Toledo women's basketball team has announced that its annual Tipoff Dinner will be held on Wednesday, Oct. 13 at 6:00 p.m. in the Student Union Auditorium. A Q&A with former Notre Dame head coach Muffet McGraw hosted by former WTOL news anchor Chrys Peterson will headline the event.

McGraw retired from coaching in April 2020 after leading the Fighting Irish for 33 seasons, leading them to national championships in 2001 and 2018. She became the 13th female coach inducted into the Naismith Memorial Basketball Hall of Fame in 2017 and won a total of 936 games, sixth-most all-time among Division I head coaches.