Given a chance to shine, Toledo's Seymour delivers 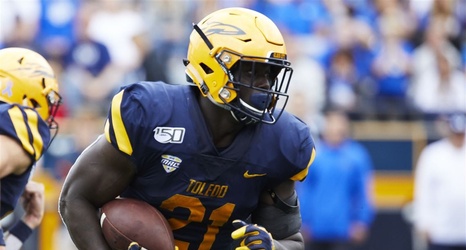 University of Toledo junior running back Shakif Seymour has developed such a close bond with sophomore running back Bryant Koback that Seymour said he was genuinely upset when Koback had to leave the game against Kent State on Tuesday with an ankle injury.

With Koback sidelined, Seymour said he ran angry and in doing so he turned in one of the best performances of his career.

He carried the ball 28 times for 175 rushing yards and two touchdowns and sealed the game with two first down runs late in the game, including a 10-yard run on a fourth-and-1 when everyone in the stadium knew he was getting the ball.