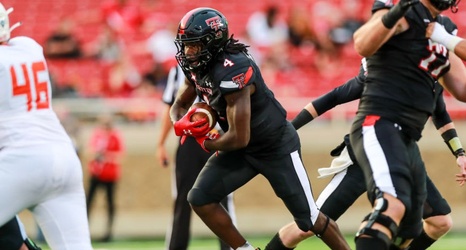 LUBBOCK, TEXAS - SEPTEMBER 12: Running back SaRodorick Thompson #4 of the Texas Tech Red Raiders runs the ball during the first half of the college football game against the Houston Baptist Huskies on September 12, 2020 at Jones AT&T Stadium in Lubbock, Texas. (Photo by John E. Moore III/Getty Images)

Had it not been for the Texas Tech football team’s play in the red zone, on both sides of the football, Saturday’s game against HBU would have been a loss.