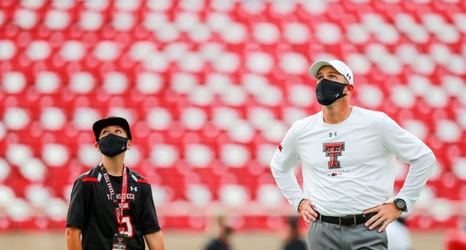 LUBBOCK, TEXAS - SEPTEMBER 12: Head Coach Matt Wells of the Texas Tech Red Raiders stands on the field with his son Wyatt Wells during warmups before the college football game against the Houston Baptist Huskies on September 12, 2020 at Jones AT&T Stadium in Lubbock, Texas. (Photo by John E. Moore III/Getty Images)

After the Houston Baptist game, we talked about Matt Wells’ struggles when it comes to situational football. Now, we have another data point to add to that discussion and it is one of the most egregious coaching mistakes in Texas Tech football history.