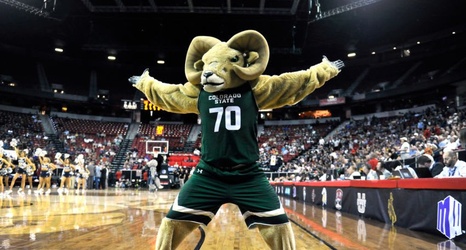 LAS VEGAS, NV - MARCH 11: The Colorado State Rams mascot CAM the Ram performs during the team's game against the Nevada Wolf Pack during the second half of the championship game of the Mountain West Conference basketball tournament at the Thomas & Mack Center on March 11, 2017 in Las Vegas, Nevada. Nevada won 79-71. (Photo by David Becker/Getty Images)

So long Chandler Jacobs. We hardly had time to get to know you. Just over a month after the guard signed to join the Texas Tech basketball program following a four-year career at Dallas Baptist, Jacobs has now changed his mind and is headed to play his final year of college basketball at Colorado State.