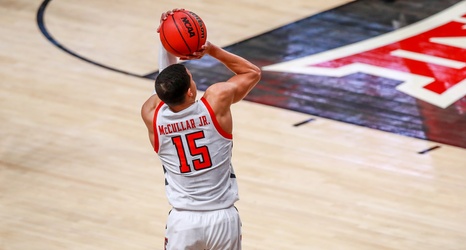 LUBBOCK, TEXAS - NOVEMBER 25: Guard Chibuzo Agbo #23 of the Texas Tech Red Raiders shoots a three-pointer during the second half of the college basketball game against the Northwestern State Demons at United Supermarkets Arena on November 25, 2020 in Lubbock, Texas. (Photo by John E. Moore III/Getty Images)

For the past two weeks, since the start of the Texas Tech basketball program’s head coaching drama, the focus of the fan base has been on which players will be coming and which will be going. But if you believe that Mark Adams is a strong coach, then the belief that some returning players on this roster will improve also has to be part of your expectations for next year.