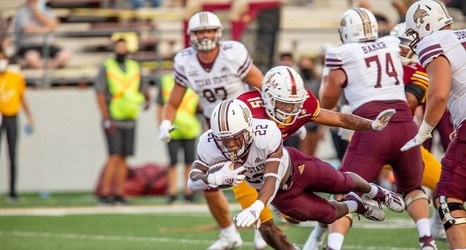 MONROE, La. – Texas State quarterback threw for two touchdowns and ran for another TD to lead the Bobcats to a 38-17 victory at ULM in Malone Stadium Saturday night.

Vitt completed 14-of-21 passes for 256 yards without an interception and led the Bobcats with 82 yards rushing on 11 carries. rushed for 44 yards and a touchdown on 14 carries. sealed the victory with the game's final seven points when he tied a school record with a 100-yard interception return for a touchdown in the fourth quarter.

The victory was Texas State's first win of the season and first road win for the Bobcats since they won at Georgia State on Nov.