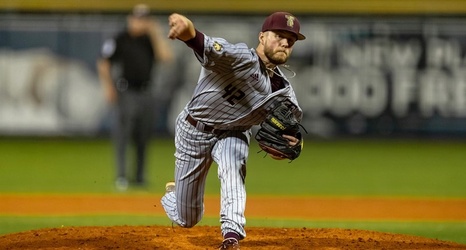 MONTGOMERY, Ala. – In his final start in a Texas State uniform, senior right-hander posted a dominate performance on the mound. However, Appalachian State came away with a 1-0 victory Tuesday night at Riverwalk Stadium.

Leigh (4-8) struck out five in 7.2 innings while allowing a run on five hits. Ben Petersen (2-3) earned the victory after throwing three scoreless innings with four strikeouts out of the bullpen. Eli Ellington picked up his fifth save of the season as he tossed three scoreless frames and struck out four.

Recording a hit for the Bobcats was , , and .