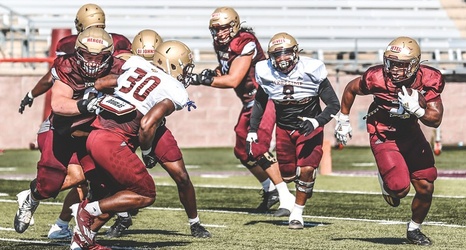 SAN MARCOS, Texas – With 32 days until the season opener, Texas State football has reported for preseason practices and will hold its first official practice of the 2022 season on Wednesday morning at Bobcat Stadium.

The Bobcats, under the direction of fourth year head coach Jake Spavital, will hold 20 days of practice over the course of August's preseason camp in preparation for the upcoming season.

Texas State, which finished last season second in the Sun Belt's West Division, returns 54 letterwinners and 19 starters from last year's roster to go with a class of more than 30 newcomers.