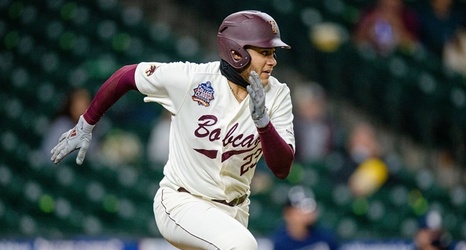 SAN MARCOS, Texas – An offensive explosion took place Tuesday night at Bobcat Ballpark as Texas State (6-8) run-ruled No. 9 TCU (8-4) 11-1 in seven innings. It is the second straight season that the Bobcats have defeated a Big XII opponent by run rule and the first win over a top 10 opponent since beating No. 3 Houston on Feb. 25, 2015 at home.

All nine Texas State batters recorded a hit on the night as the team had a season-high 16 base knocks. Leading the way with three hits apiece was and .