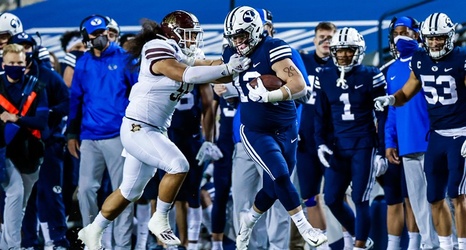 PROVO, Utah —Texas State jumped out to an early lead but could not contain 12th-ranked BYU (6-0) as the Cougars defeated the Bobcats 52-14 Saturday night at LaVell Edwards Stadium.

Texas State jumped out to a 7-0 lead when they took the opening kickoff and drove down the field 75 yards. The Bobcats (1-6, 1-2 in the Sun Belt) scored their first touchdown in the game when Brady McBride threw a 19-yard pass to Marcell Barbee, and Seth Keller added the extra point.

BYU came right back to score six touchdowns on offense and a defensive TD to take a 49-7 lead.