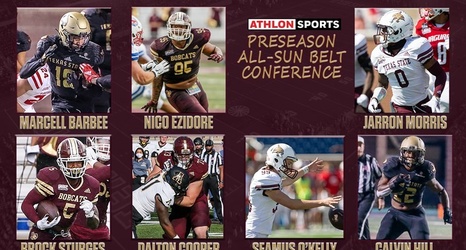 SAN MARCOS, Texas – Athlon Sports announced that seven Texas State football players are on its 2021 Preseason All-Sun Belt Conference teams.Wide receiver Marcell Barbee is on the second-team offense, while defensive lineman Nico Ezidore and defensive back Jarron Morris are on the second-team defense.Running back Brock Sturges and offensive tackle Dalton Cooper are on the third-team offense while running back Calvin Hill is on the fourth-team offense, and punter Seamus O'Kelly is a fourth-team specialist.

Barbee led the Bobcats with 40 receptions for 584 yards and 10 touchdowns.