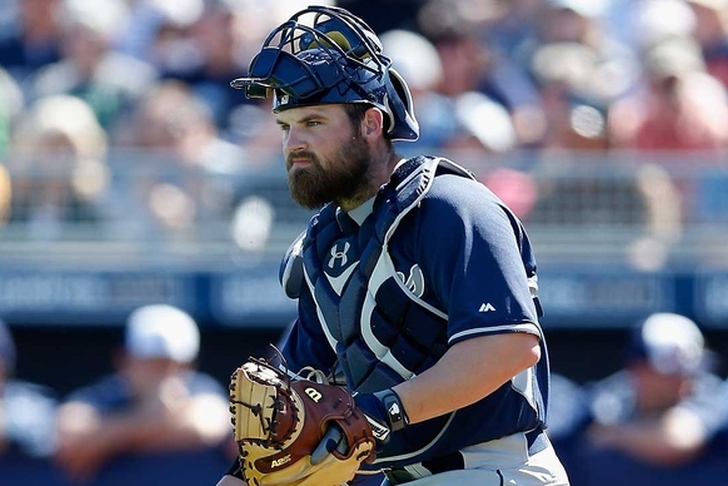 The MLB trade deadline is just two days away and the Texas Rangers trade rumors are starting to heat up on the hot stove. The Rangers are 60-44, at the top of the AL West and have already completed one minor trade for pitching help. They likely aren't done yet, so here all the latest Rangers trade rumors.

Rangers Out On Jonathan Lucroy?
The Rangers had been linked heavily to the Brewers' catcher, but it appears unlikely that he'll be taking his talents to Texas.

#Rangers are also out on Lucroy. Unless there's a mystery team, signs are pointing increasingly toward Cleveland.

Catcher remains an area of need for Texas, and they're looking at a few other options.

Rangers continue to poke around in the catching market. Currently keeping tabs and doing background work on Kurt Suzuki and Derek Norris.

Both the Padres' Norris and the Twins' Suzuki would be cheaper for the Rangers in terms of prospects and money. That would help the Rangers focus on other areas of need, like pitching.

Rangers Called About Sale, Quintana?
If the White Sox enter a full-on fire sale, starting pitchers Chris Sale and Jose Quintana could be dealt. The Texas Rangers have showed the most interest, although it seems a bit unlikely that either will be dealt to Texas.

Sources: #Rangers have talked to #WhiteSox about Quintana as well as Sale. Same story: No traction due to differences in perceived value.

Chicago's asking price for Sale has been high.

The Rangers could be willing to part with Gallo, but Mazara is not going anywhere. The Rangers lack a player to effectively replace him in the lineup, and unless Texas also managed to swing a trade for Jay Bruce, they likely can't add one.

Rangers Looking At Bruce?
And speaking of Bruce, the Rangers have at least looked at the Reds' outfielder.

The #Rangers have checked in on Jay Bruce, two sources said. Pitching is still their main priority.

Bruce could fit as a replacement for Mazara if he's dealt or as the new DH (especially if Joey Gallo is traded) with Prince Fielder done for the year. However, the Rangers' interest seems to be more of the tire-kicking level.

Rangers And Velasquez?
And back to pitching once more, the Rangers had been linked to the Phillies' Vince Velasquez. Those trade talks were "pretty deep," but it doesn't seem like a deal will be getting done.

Crasnick doesn't explain why, but it's easy to assume it's because the Phillies (rightfully) have a steep asking for price the 24-year-old. He's a talented pitcher and under team control for several more years. However, Jeremy Hellickson is more getable and could be dealt to the Rangers, or another team.

Follow our Texas Rangers team page for all the latest Rangers Trade Rumors or download the Chat Sports App!