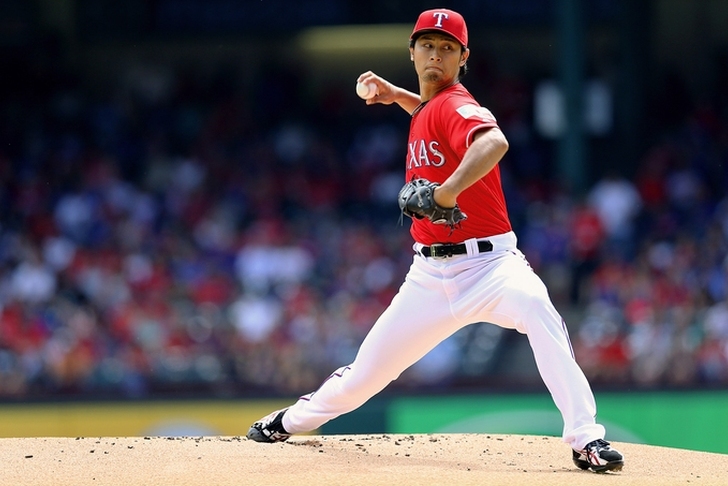 The Texas Rangers were plagued by injuries last season, with the loss of ace pitcher Yu Darvish the most painful of all. With the injuries, it seemed like the Rangers were going to miss the playoffs for the third straight season. Instead, the Rangers went 88-74 and won the AL West. While the Rangers were bounced in the ALDS by the Toronto Blue Jays, 2016 is setting up to be another impressive season for the Rangers. With that in mind, here is our Texas Rangers 2016 Season Preview and Prediction.

Desmond is best known as a shortstop, but when he signed with the Rangers at the end of February, he agreed to switch positions. He'll be moving to left field this year. Desmond was the Rangers' only major addition (not counting the re-signing of starting pitcher Colby Lewis). Ruggiano will be the team's fourth outfielder, while Barnette and Wilhelmsen are a relief pitchers. Jones could be the team's No. 5 OF. Wilhemsen and Jones were acquired via a trade with the Seattle Mariners.

Gallardo is gone, and the Rangers will miss him in the starting rotation. Of course, a previously injured ace will return to Texas, which more than makes up for the loss of Gallardo. Venable and Napoli were bench players and not major losses. Martin was shipped out in the trade that brought over Wilhelmsen and Jones. For more Rangers coverage, download the Chat Sports Android and iPhone app.

The Rangers have a strong lineup. DeShields was impressive last season and Choo is the team's best outfielder. Fielder had a bounce-back season, while Beltre and Moreland form a solid corner infield. Andrus and Odor are still developing, but hold promise. Andrus will need to rebound after a pair of critcal errors in the ALDS. With several left-handed hitters, the Rangers could struggle at times against lefty pitchers.

The return of Darvish in May is massive, with Chi Chi Gonzales taking over as the starter until Darvish returns. Hamels returns after being a mid-season pick up last year and he'll be a high-quality No. 2 starter. Holland and Lewis both missed time last season and the Rangers are glad to have them back healthy. Lewis is back on a one-year deal, and makes for a strong No. 5 starter. Texas' starting rotation is a big reason why the Rangers are a possible playoff team.

What will the Rangers get from Hamilton this season? He played in just 50 games last year, as injuries continued to plague him. He'll start the season on the DL this year, and the Rangers signed Desmond to take over in left. It seems as if the Rangers are treating Hamilton as a luxury, which is the right move. At this stage in his career, it's impossible to know what he'll contribute. Ideally, Hamilton shows flashes 30-homer, 100-RBI ability he had in the past with the Rangers in a part-time role this season. If that happens, the Rangers' lineup becomes even more deadly.

The Rangers are one of the top teams in the American League and it's setting up to be a Houston Astros vs. Rangers battle for the AL West. Both teams have the pitching and hitting to make the postseason, but the Rangers' rotation just a bit deeper. While the Rangers may have a bit of regression from some hitters, the return of Darvish will help compensate. If the Rangers don't win the AL West, then a wild card berth is likely.