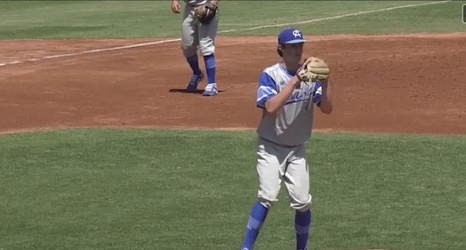 I had reached out to LSB commenter HufftheMagicDragon to get his take on recently-drafted Rangers’ prospect Dylan MacLean. The initial intention had been to include this analysis in the Hidden Gems article on pitchers. However, HtMD went into such detail that this deserved it’s own article. The only contributions I’ve made here are to condense the analysis for reader flow, add some brief commentary in brackets, and to include the video and gif examples of the motions HtMD mentions. Every bit of the credit should go to HtMD. Let’s get to his analysis:

Dylan MacLean (LHP) may very well be one of the best pitchers in the Rangers’ farm system, and while he currently isn’t listed as one of the Rangers’ top 30 prospects per MLB Pipeline; I’d expect that to change in the near future.