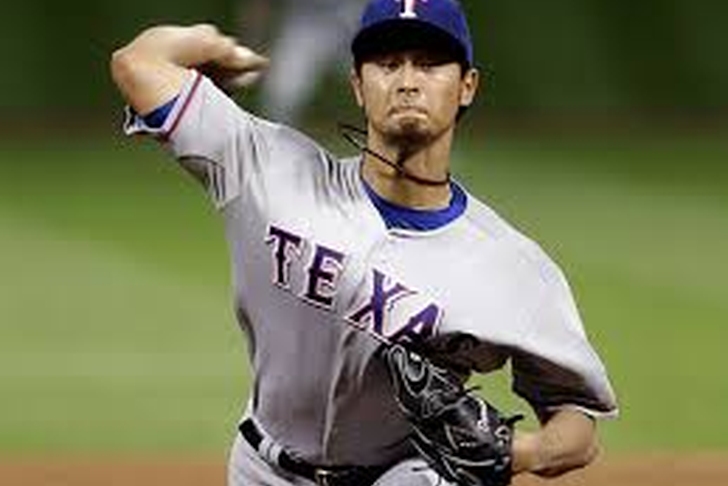 The timeless baseball adage goes "Pitching wins championships." I know, I know - you're an offense fanatic.  You grew up belting homer after homer with Albert Pujols on Slugfest. You live for the fireworks - the breathtaking season Alex Rodriguez gave us in 2003, or Barry Bonds’ 73 long ball campaign two years earlier. Don't believe the saying? Take a look at two of the last three truly elite offenses that (quite bluntly) blew it in the World Series: The 2010 Texas Rangers and the 2012 Detroit Tigers.  Their downfall? Simple. They were out-pitched by the same team, who stood firmly by this infallible philosophy.

If the Rangers are to capture Texas' first ever World Series title, their pitching will have to shoulder a majority of the load down this stretch run. No pressure.

The good news - in my opinion, 2013 has been the Texas Rangers' best pitching season in their history.  Yes, that includes the late seventies when the likes of knuckleballer Charlie Hough and Fergie Jenkins dominated in old Arlington Stadium.  This year’s staff also trumps that of 2010, when the Rangers pulled off a monster deal with the Seattle Mariners to acquire ace Cliff Lee.

Despite their bankruptcy, they reigned in one of the best pitchers in the game and rode him all the way to the franchise's first World Series appearance against the San Francisco Giants.  Then the rest was history… and heartbreak.  Astoundingly Lee was pounded twice in that series. In game one, he surrendered six runs in four and two-thirds innings. In game five, he pitched much more effectively, but gave up the World Series winning three-run homer to Edgar Renteria in the eighth inning (who has come up big in his share of Fall Classics), on a dead red fastball over the plate.

Lee simply wasn’t himself in that series. After blowing through two far better teams in Tampa Bay and New York (3-0, 0.56 ERA in three starts against those teams in the ALDS and ALCS), he was undone by a vastly underwhelming Giants squad that more than anything else, seemed to resemble the kids from The Sandlot.

Now the Rangers and their fans can finally boast a truly elite pitching staff - one that can carry the burden of a long and grueling season and bring home that ever-elusive first title.  With the impressive numbers the Ranger's rotation is putting up this season, it is easier than one might think to forget that Matt Harrison, the team leader in both wins (18) and ERA (3.29) last year, has pitched all of ten innings in 2013.  Colby Lewis, the rock of the rotation over the last three seasons and historically the team’s most reliable postseason pitcher (4-1, 2.34 ERA in six postseason starts over the last two years) hasn't faced a single Major League hitter this year.

Both Harrison and Lewis are done for the year. Yet the Rangers' rotation remains just as formidable as any in the majors.  This season, the staff ranks in the American League’s top three in ERA, total runs allowed, and opponents’ batting average – despite those injuries. Using a blend of in-house talent and trades, the Rangers have a rotation they can trust to carry them into October.

Yu Darvish is the first name that comes to mind.  He is an undisputed ace and the leader of the staff.   Last year, in addition to experiencing typical rookie challenges, he was uncomfortable with his new surroundings and teammates.  Featuring likely the most dazzling assortment of pitches (believed to be seven or more) in the league, control and composure was an issue and he still walked 4.2 batters per nine innings for the year.  With experience, he learned to relax and slow games down for himself, as he turned it around in the last two months of the 2012 season. He came into this year as the guaranteed no. 1 in the rotation.

Currently leading the majors with 236 strikeouts and also featuring the league’s lowest opponent batting average of .189, Darvish has placed himself in the AL Cy Young conversation.  His walk rate is way down from last year, fastball velocity is just under two ticks up, and his opponent's batting average is about 30 points down from last year. Critics claimed that hitters would figure him out.  Based on what I've seen from him, that's the farthest thing from the truth.

Here’s Yu’s stat comparison from 2012 to this season.

Yu's single flaw is his over-reliance on his off-speed pitches.  His slider might be one of the three single best pitches in baseball (along with Clayton Kershaw's curve, and Aroldis Chapman's fastball) but he tends to lean on it a little too much especially in hitter's counts, prone to hanging the pitch, and relying on its elite movement to miss bats. This explains the 22 homeruns he’s given up this season.  He possesses a fastball that can climb up to 98 mph that he should use more often, but he excels in every other facet of pitching.

Darvish’s greatest asset is that at 27, he is just entering into his prime physical years and is already pitching like an ace. Just wait till he busts out his “mystery pitch” that everyone rumors about. Whatever it is or looks like, it can’t make hitters feel any more comfortable at the plate.

As the world saw with the 2010 Rangers, one elite starter alone cannot a World Series win. Every contending staff MUST have at least a solid no. 2 pitcher.  This year that's Derek Holland.  He's having by far the best year of his career. He features a hard 94-96 mph sinker that he can bring in on righties or tail away from lefties, and a devastating slider that he loves to break down and in on righties.

On pace to shatter his career records in innings pitched, strikeouts and ERA (which he has cut down by over 1.5 runs/per game from last season) he fits the bill as a legitimate number two starter whom Ranger fans should trust in a game two start. Don’t forget the circus he brings with him – the Arnold Schwarzenegger and Harry Carry impressions are spot on. He can be a clown, but he’s matured noticeably since his rookie year. He has learned to let that outgoing personality shine on the mound and in the clubhouse.

To round out the rotation, throw in rental Matt Garza, AL Rookie of the Year Candidate (possibly favorite) Martin Perez, and current fill-in starter Travis Blackley, who has pitched respectably since being called up three weeks ago.

Along with an excellent track record pitching in the vaunted AL East (except for you Blue Jays – sorry), Garza brings a uniquely-competitive fire to the bump every five days.  His energy is captivating and really excites the fans and the team.  The Rangers paid a fortune to acquire him from the Cubs in July, but so far he has paid dividends.  His line with the Rangers (3-2. 4.04 ERA) doesn’t necessarily blow anyone away (although they are solid, but he keeps the team in the game with sheer grit and a fearless, attacking mound presence.  I'd love to see the Rangers resign him after this season.

This club will lean on Darvish, Holland and Garza in the postseason.  If you ask me that's as good as any starting 1-3 in the game.

Elite pitching is in place, and there has never been a better time than now for these Ranger starters to prove their status as among the AL's best, and bring home a title to Texas.