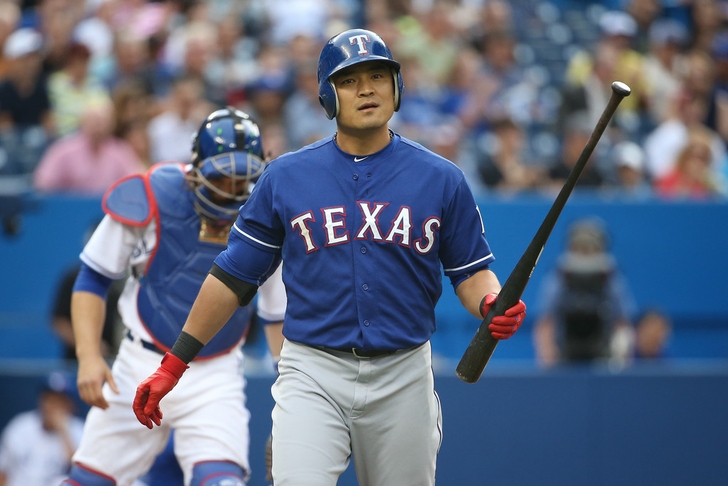 You can’t win them all every single month of every single baseball season, and these next three guys are living proof of that. Here’s our list of 3 Texas Rangers Players Who Have Been A Disappointment So Far In 2015.

Martin's defense in the middle of the outfield has been just as dependable as ever in 2015, but his streaky bat is once again proving to be a major liability. Martin's batting average has dipped 33 points (.255 to .222) since June 11th -- a stretch which has seen him alternate between rolling over to the right side and striking out while attempting to overcorrect with added aggression at the plate.

His swing's a mess right now, and it could end up costing him extended playing time with Josh Hamilton and Delino DeShields on their way back from injury.

We'll let Bleacher Report's Rick Weiner do the heavy lifting on this one:

After hitting .295 with six home runs, 18 RBI and a .888 OPS in May, it looked as if maybe—just maybe—Shin-Soo Choo had finally turned a corner and was back to being the player Texas thought it was getting when the team signed him to a seven-year, $130 million deal before the 2014 season.

But Choo has proven once again that looks can be deceiving, as he's struggled mightily in June, including a miserable showing last week that saw him strikeout against Toronto's Matt Boyd, who was facing his first major league batter.

Choo's .680 OPS is a full 146 points less than his career mark -- a troubling stat that hopefully represents an outlier in what has been an otherwise impressive and productive MLB career.

Acquired from the Washington Nationals on the last day of the MLB Winter Meetings in December, Detwiler has been a notch or two below ineffective both when used as a starter (seven times) and as a reliever (seven times). With one quality start to his name and a putrid 7.26/1.92 ERA/WHIP split, his $3.45 million salary for 2015 smacks of highway robbery on his end.