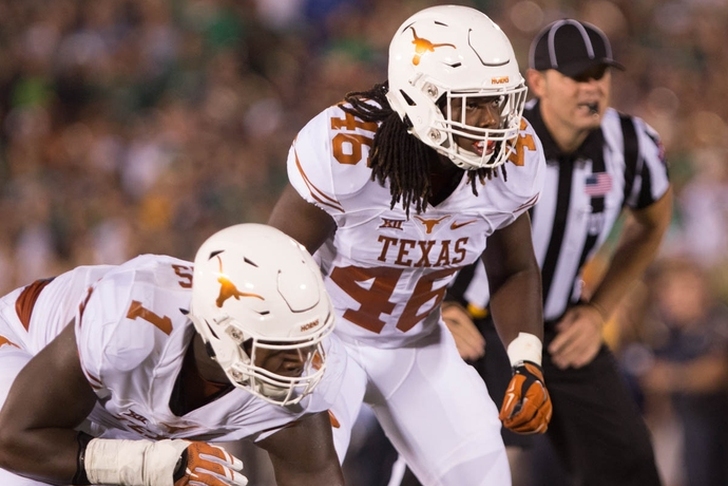 The Texas Longhorns bounced back from an embarrassing 24-0 loss to Iowa State by crushing Kansas 59-20. It was a game Texas should have easily won and they did. However, Texas is still 4-5 with far more questions than answers. That has placed Charlie Strong's team in the front seat of the rumor train. With that in mind, here's our Texas Football Rumors Roundup following the win over Kansas.

Jefferson hasn't had the impact the past two games he had for Texas in early season because he's fighting a stomach bug.

“I think it's more his stomach, a stomach virus or whatever, but he's one of those guys that I think I could have started,” head coach Charlie Strong told 247Sports. “I just didn't want him out there and then all of a sudden you kept bouncing him back and forth, but when he was ready to go we put him in.”

“I think he's really sick because he's been throwing up and things like that all week,” Jinkens told 247Sports. “The thing about Malik is even when he's not playing he's constantly talking to us. He's a great teammate and I wish him the best ... I hope he gets well soon.”

Texas did its job by beating Kansas, but a bowl game is still in doubt. Beating Baylor is going to be very, very difficult. The Bears are simply a better team right now and they should be heavily favored. That leaves games against West Virginia and Texas Tech, both games that Texas can win. However, they'll be difficult games and it wouldn't be surprising if Texas was the underdog in both. Missing a bowl game is not okay at Texas and not part of Strong's rebuilding plan.

A 24-0 loss to Iowa State is easily the worst loss of Charlie Strong's tenure with the Longhorns. Texas isn't supposed to EVER lose to Iowa State, even if it is a rebuilding year for the Longhorns. Plus, this is an Iowa State that likely won't even make a bowl game. Getting shutout makes the game only more embarrassing. The loss put Strong right back on the hot seat and a win over a terrible Kansas team isn't anywhere enough to take him off it.

The Mountaineers are up next for the Longhorns, and WVU are full-touchdown favorites. As mentioned above, it's a game Texas desperately needs to win to keep it's bowl hopes in good shape.

Three-star tight end Major Tennison made an unofficial visit to Oklahoma State over the weekend. However, 247Sports reports he's still a solid verbal to Texas.