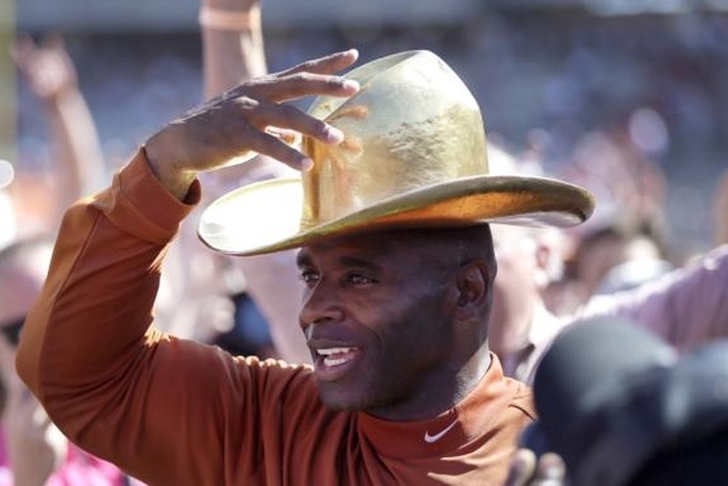 The Texas Longhorns (2-4) had their bye this weekend and the Longhorns surely used the extra time off to prepare for their next game against Kansas State. The Longhorns are still riding high after their upset win over Oklahoma. Here's the latest on Texas Football following their bye week.

Texas AD Has Faith In Strong

“Charlie was the happiest about [the win], but I was No. 2 ...” Perrin told the Austin American-Statesman. “I remain convinced Charlie Strong is the man to lead our football program."

Perrin is only the interim AD, but it seems like Strong's job is safe as long as Perrin is calling the shots.

In a bit of sad Texas football news, Bevo XIV died from Bovine Leukemia according to the Texas website. Bevo died "peacefully" in his sleep, and Texas plans on having a new mascot on the sidelines for the start of the 2016 season.

The Longhorns have picked up a commitment from a 2017 3-star TE, according to 247Sports. Major Tennison is the third member of Texas' 2017 class. He might not compete for playing time right away, but he will compete for best name. Tennison had offers from Oklahoma State and Texas Tech, but committing to Texas was a no-brainer.

“I grew up a big Texas fan,” Tennison told 247Sports. “Even when I was a little kid and didn’t know how to use a remote, I would tell my dad to put the television on the Texas game. I’ve always loved the program, and it feels amazing to be a part of it now.”