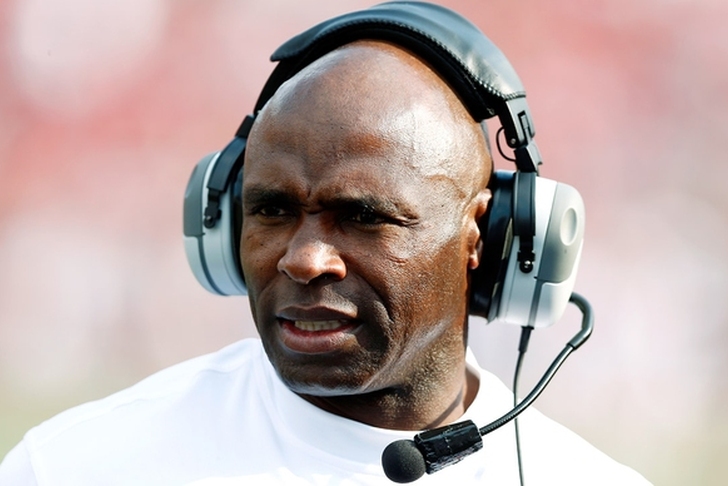 The Texas Longhorns are still reeling after this past Saturday's gut-punch of a 30-27 loss to the Oklahoma State Cowboys. Sitting at 1-3 with a whole lot more questions than answers on the docket, Charlie Strong's team once again finds itself in the front seat of the rumor train. With that in mind, here's our Texas Football Rumors Roundup for October 1st.

Saturday's loss to the Cowboys dropped Strong's overall record in Austin to 7-10, and while many notable college coaches have struggled out of the gate to open off stints at major programs (Strong's done it once before himself, starting 9-10 at Louisville), there is still plenty of chirping emanating from around Austin which suggests Strong's job will be on the line if the Longhorns keep shoveling dirt on their 2015 season in quick fashion.

As CBS Sports' Dennis Dodd sees it, "Texas -- and the rest of the Big 12 -- are miles behind conference favorites TCU and Baylor. Before the Horns are a national program again, they've got to break through against the two Texas privates."

So, a massive upset at TCU on October 3rd could be just what Strong needs to quiet the "hot seat" talk for good in 2015. However, if Texas falls, don't be surprised if the chirping gets louder.

The Longhorns are reportedly interested in making a run at 2016 4-star Beaumont running back Devwah Whaley, but they're going to have one heck of a time getting him into burnt orange if that's the case.

Per Chris Okrainetz of FanSided, "the growing perception is that Texas is behind programs like Georgia, Texas A&M, and Oklahoma, when it comes to Whaley."

Ranked as the #4 running back in the Class of 2016 by 247Sports. Whaley holds 21 offers in all. He's considered to be a heavy Georgia lean (especially after a recent visit to Athens), and he is slated to make his college decision in early January at the Under Armour All-America Game.

Texas A&M regent Tony Buzbee added some fuel to the regional rivalry between the Aggies and Longhorns, even considering the fact the teams on-field rivalry has been dormant for awhile now.

The Austin American Statesment reported on a since-deleted Facebook post by Buzbee which stated that, although Buzbee hasn't personally talked with the board of regents or the university's football department about it, he thinks the time is now to schedule some "cupcake games" against the Longhorns.

Via Scott Soshnick and Eben Novy-Williams of Bloomberg Business:

"Nike Inc. won’t renew its apparel contract with the University of Texas before the company’s exclusive negotiating window expires on Oct. 1, according to people with direct knowledge of the talks. That opens the bidding to Nike rivals including Under Armour Inc. and Adidas AG, the companies most likely to pay to put their logos on every uniform the Longhorns wear -- and on the millions of dollars in gear Texas fans buy."

Said deal could easily be worth $15 million or more annually if Nike's recent 11-year, $169 million pact with the University of Michigan is any indication.