Texas Football Roundup: News, Rumors And Recruiting - Everything You Need To Know At Mid-Season 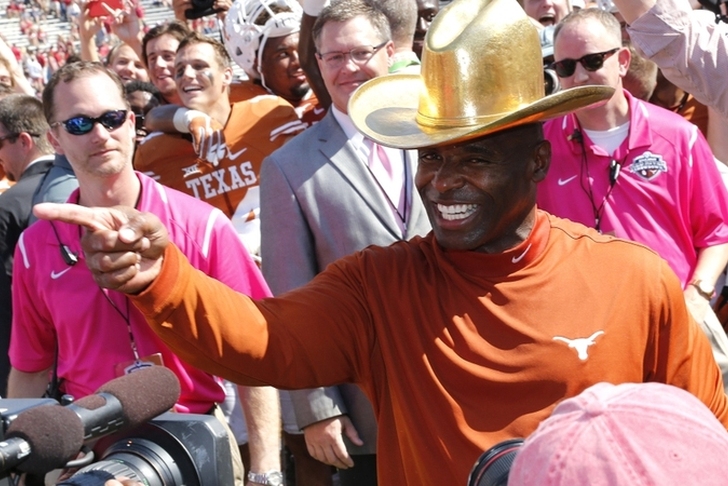 The Texas Longhorns are at the mid-way point of the college football season. The Longhorns started the year 1-4, but a critical upset over the previously-undefeated Oklahoma Sooners gave the team a renewed hope for the season. While a Big 12 title is essentially impossible at this point, the Longhorns can still close the season strong. Here's everything you need to know about Texas football at mid-season.

Strong found himself on the hot seat after the 1-4 start. However, the win over OU cooled it off tremendously. Interim AD Mike Perrin offered support for Strong earlier this week.

“Charlie was the happiest about [the win], but I was No. 2 ...” Perrin told the Austin American-Statesman. “I remain convinced Charlie Strong is the man to lead our football program."

Perrin is only the interim AD, but Strong's job appears safe as long as Perrin is calling the shots. Assuming, of course, that Texas doesn't lose the rest of its game.

Tyrone Swoopes began the season as the starter at QB, but Heard took over after the first game and looks like the QB of the future for Texas. While Swoopes has still received playing time in certain packages, this is Heard's team. He has plenty of development to do, especially as a passer. Even in the win over Oklahoma, Heard only threw for 53 yards. However, Heard has been dynamic on the ground, racking up 100 yards twice this season, and 96 once. Heard isn't there yet, but he has the potential to be the QB Texas has searched for since Colt McCoy graduated.

National Signing Day is still months away, but now is a good time to check in on the Longhorns' 2016 recruiting class. Texas has 9 hard commits, according to 247Sports. Three of those are 4-star WRs and Texas has four 4-stars in total. The rest are 3-star recruits. That's a bit on the low end at this point in the season for a team like Texas, but Strong should end up with another strong class.

Thankfully, it appears the Longhorns will settle a lawsuit with the Oklahoma State Cowboys over offensive line coach Joe Wickline. The Cowboys were owed a buyout if Wickline didn't take a job that involved play-calling duties. Texas tried to fight it, and former AD Steve Patterson refused to get involved, leaving it all on his coaching staff. It was a matter that should have been handled a long time ago, and it's good see Texas finally ending the distraction.

Texas has leaned heavily on freshmen this season, which is part of Strong's rebuilding plan. None of the freshmen have been more impressive than MLB Malik Jefferson, which shouldn't be a surprise. He was a highly touted recruit and he's lived up to much of the hype this season. He leads the Longhorns in sacks, tackles for loss and quarterback hits. He's second on the team in tackles and is only going to get better as the season goes on. Strong is starting two true freshmen on the offensive line in Connor Williams and Patrick Vahe. CB Holton Hill looks like the next great Texas defensive back. Those are only a few of the true freshmen seeing playing time this season. While all of them still have plenty of growing to do, the future holds promise for Texas.