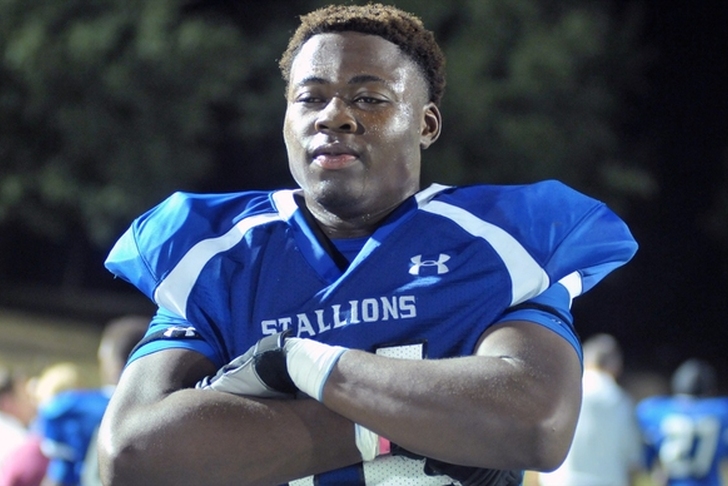 The Texas Longhorns had a bye in Week 12, which means it's a slightly lighter update for recruiting. However, there were still a few recruiting developments worth mentioning. With that in mind, here's our Texas Football Recruiting Update - Everything You Need To Know After Week 12:

Jean Delance is a four-star offensive lineman and one the top recruiting targets for the Longhorns in the Class of 2016. Delance spoke with 247Sports about Texas' recruitment of him. Texas tight ends coach Jeff Traylor and LBs coach Brian Jean-Mary paid a visit during the team's bye to check in with Delance.

“Coach BJ and Coach Traylor came out and showed me a lot of love,” Delance said. “I just shook their hands, and they told me that I’m a guy that they need to play as soon as possible. I just felt a lot of love from the get go.”

Texas views Delance as a left tackle, which Delance likes to hear.

“(Texas) is definitely pushing early playing time,” Delance said. “They think that I’m a prototypical left tackle. When a coach tells me that, I think about it a lot.”

Three-star 2016 commit Obi Eboh visited Oklahoma over the weekend. The defensive back committed to Texas back in early September. It's not the first time Eboh has visited Oklahoma and the Sooners could still steal Eboh from Texas.

Stephen Sullivan is expected to visit the Longhorns next month. Hailing from Louisiana, Sullivan is a four-star recruit with an offer from Texas. However, he's expected to commit to either TCU or LSU, per 247Sports.

Four-star QB Shane Buechele led his high school, Arlington Lamar, to a win this weekend. He accounted for four touchdowns, two of which came on the ground. The dual-threat completed 10 of 14 passes for 129 yards and added 113 yards on the ground. He's the only QB committ Texas has the class of 2016.