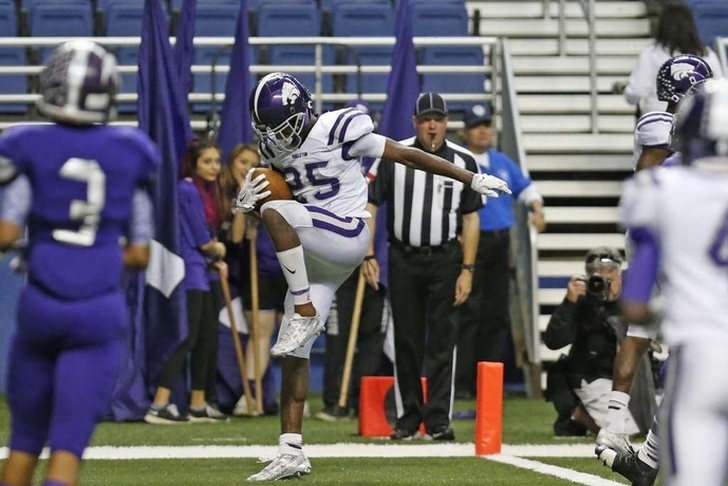 With spring practice over and no football until fall for the Texas Longhorns, recruiting takes center stage for Tom Herman and his coaching staff. Texas is off to a strong start early, ranking 13th in the nation with eight commits. But Texas is far from done and there's plenty of action around Texas football recruiting. Here are all the latest Texas recruiting news and rumors you need to know.

Latest On B.J. Foster
One Texas' top targets right now if five-star DB B.J. Foster, who announced on Twitter that he'll decide between LSU, Michigan, Ohio State, TCU and Texas on June 5th. Foster is the No. 15 player in the nation and the No. 1 player from the Texas. The good news for the Longhorns is that 247Sports' crystal ball puts Texas as the overwhelming favorites to land the nation's top safety.

Longhorns Make Cut For Two Four-Star DL
Texas is in the market for more defensive line help and they just made the first round of cuts for two four-star defensive linemen. First up is DE Ronnie Perkins, who has Texas in his top 12.

Perkins hails from St. Louis, Missouri, where he's the No. 4 player in the state. He's the No. 136 overall recruit and the No. 7 weakside DE. However, Oklahoma and Missouri are the two front-runners for Perkins according to 247Sports.

On the interior, four-star DT Keondre Coburn revealed his top 16 on Twitter.

My top 16. I know it's a lot but these The schools that got me thinking pic.twitter.com/a8Ee3hSQFA

Coburn is a top 100 recruit, checking in at No. 93 overall and No. 11 recruit from Texas. The Longhorns are the current favorite for Coburn.

Texas Offers 2019 RB
The 2018 recruiting class gets most of the focus, but Texas isn't ignoring the 2019 class. Their latest move is to offer a scholarship to RB Quavaris Crouch.

Blessed to receive an offer from the University of Texas. God is faithful and just. Through Him anything is possible. #Faith #TeamJesus pic.twitter.com/GNuoOrIj0i

Crouch is listed as a four-star recruit by 247Sports and the No. 28 overall player. He hails from North Carolina, where he's the No. 2 players in the state. He already holds an impressive offer list that includes schools like Clemson, Alabama, Stanford, Florida State and more.

Check out our Texas Longhorns team page for all the latest Texas Football Rumors or download the Chat Sports App!