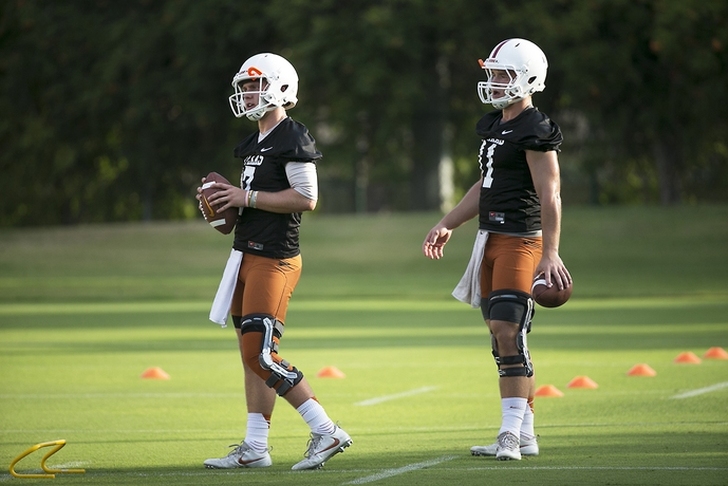 Even though quarterback Shane Buechele started all 12 games for the Texas Longhorns last season, new head coach Tom Herman has maintained a competition between him and freshman Sam Ehlinger since the start of spring practice.

When speaking to the media on Thursday, Herman told reporters that he'd like to name a starter by next Monday, Aug. 28 - and that Ehlinger, who was named the Offensive MVP of the team's second scrimmage, is really gaining ground in the competition.

“I would think so. I do think going in that Monday of, kinda, we're introducing Maryland, you're gonna want the guy that's gonna be the guy to be the guy... But I don't know, you know?" Herman said. "If Sam continues the trajectory that he's on, and it's not that Shane's playing bad, he's not. Shane's playing well, but Sam has played better. So we'll see where we are at the end of the week and if it's too close to call, it's too close to call. But you'd like to, I think, ideally, kind of settle into somebody going into that Monday of the next week.”

Coming out of spring practice, Buechele looked like he was a lock to claim the starting job, especially after he completed 23 of 39 passes for 369 yards, two touchdowns and one pick in the spring game (he also ran for 42 yards and another score).

Ehlinger struggled (10 of 31 for 148 yards and a touchdown), but Herman said he wanted to keep the competition going because "a healthy fear of losing your job is just that: healthy." The freshman has continued to improve in fall camp while Buechele has been inconsistent and sloppy at times, which Herman wants to see improve.

“Cut down on the mistakes, cut down on the turnovers,” Herman said of Buechele. “We fumbled an exchange today; I don’t think he threw any interceptions, which was good.

“It’s a much more complex offense than what he is used to. So, I think at times -- forget is not the right word -- but reverts back to just, ‘Hey, take the snap and throw it to who I think is going to be open on this play.’ That’s not always the case. You’ve got to read defenses, you’ve got to adjust protections, you’ve got to put people in motion. You’ve got to do a lot of things in our offense, and he’s getting there. I’m confident that in the next 16 days he can get there, especially when you start dialing into a game plan.

Buechele completed 60 percent of his passes for 2,958 yards, 21 touchdowns and 11 interceptions last season.

Check out our Texas Longhorns team page for all the latest on Texas Football or download the Chat Sports App!