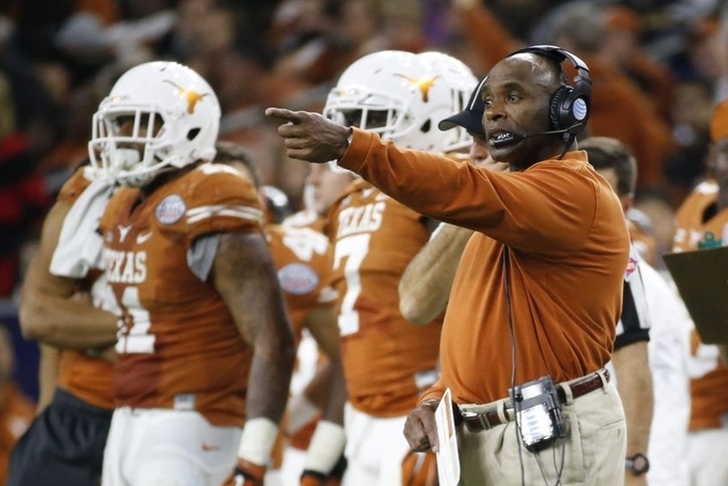 Texas football heads into the 2015 regular season with a strange air about the program. It's a puzzling time for a program that probably shouldn't have made a bowl with Charlie Strong slashing and burning the team's depth chart in 2015 but did anyway. This Texas team is one of the biggest boom/bust teams in the nation this year, and these seven burning questions continue to linger as we assess the team heading into this week's showdown with Notre Dame.

1. What's the real story with the QB position?

Tyrone Swoopes won the starting job this offseason despite throwing four interceptions in a 48-10 loss to TCU to close the regular season, along with passing for just 57 yards in a loss to Arkansas in the Texas Bowl. Swoopes and redshirt freshman Jerrod Heard will both play in the season opener against Notre Dame, though, so you'd have to think the leash will be short for Swoopes if he sputters out of the gate in September.

The senior wide receiver says he is, but the former blue-chipper's production so far in Austin seems to say otherwise. Johnson posted 48 receptions for 458 yards and two touchdowns last year -- hardly star's numbers. However, Texas' passing game will add an extra facet with Heard looming in spot play (or more), and Johnson could easily benefit and put up a season worth the billing he came with out of high school.

3. Can Texas get two wins against Baylor, TCU and Oklahoma?

Oklahoma is beatable. That much is for sure. However, the problem here is that the Longhorns will hit the road to face Baylor and TCU this year -- in-state games that used to have a distinct Longhorns flair before the Bears and Horned Frogs became Big 12 superpowers. The Horns will have their share of fans at both games, but a win either in Waco or Fort Worth is going to be extremely tough. Major upset tough.

4. Is Malik Jefferson ready to make a massive impact?

We say yes, but the fact remains that he's a true freshman and there's going to be growing pains associated with that. Regardless, he's talented enough to be THE star of a stacked Texas defense this year and should be a shoo-in for Big 12 Defensive Rookie of the Year.

5. Speaking of the defense, is the hide-and-seek game over?

The Longhorns defense played a critical role in lifting the team to bowl eligibility last year, stifling inferior opponents with regularity and giving a spotty attack great field position to work with. Texas did give up 40+ points to BYU, Iowa State and TCU last year. The Longhorns did outlast ISU in a shootout, but UT can't get into score-for-score mode if they want to challenge the current class of the conference.

6. Can Johnathan Gray push the offense over the top?

For this to happen, Gray has to rush for over 1,000 yards and double-digit touchdowns while staying healthy and surviving lapses from an offensive line that is still in flux. He has the closing burst and pure strength to earn a Big 12 First-Team spot even with Samaje Perine hanging around. The offense will flourish if Gray can reach even 80% of that potential in 2015.

The simple answer to this is that we have no clue. Texas has one of those rosters you just have to scratch your head over. There's talent everywhere but there's no telling just yet if the blue-chippers have developed enough cohesion to grit through the close games together and take a couple away from the Baylors of the world. How do we assess this team's potential in year two of the Charlie Strong era with so many moving piece abound? We wait and see.