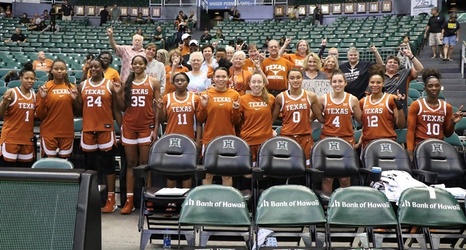 HONOLULU – Hawaii held Texas without a field goal for the first eight minutes of the fourth quarter as the Lady 'Bows defeated the Longhorns, 73-60, in the Rainbow Wahine Showdown on Sunday afternoon at the Stan Sheriff Center.

Charlie Collier scored 18, Joyner Holmes 17 and Celeste Taylor 13 for Texas. Amy Atwell scored 24 for Hawaii, which included a 9-of-14 performance from three-point territory and six-of-seven from the free throw line.