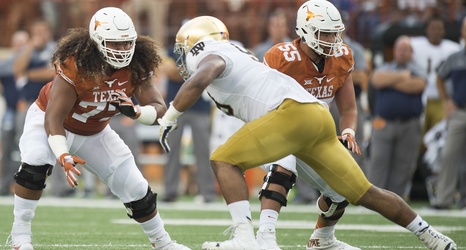 HONOLULU, Hawaii – Junior offensive lineman Patrick Vahe has been named to the 2017 watch list for the Polynesian College Football Player of the Year Award, the Polynesian Football Hall of Fame announced on Thursday morning.

A native of Euless, Texas, Vahe has played in 22 career games with 19 starts under his belt. He played in all 12 games as a sophomore last season, making nine starts. He helped the Longhorns' offense to a school-record seven 500-yard performances. He was integral in helping running back D'Onta Foreman rush for 100 yards in every game en route to winning the Doak Walker Award and the Earl Campbell Tyler Rose Award.