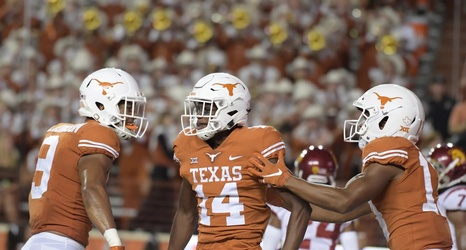 During a media availability on Thursday, Texas Longhorns head coach Tom Herman provided an update on junior wide receiver Joshua Moore, who missed the entirety of the 2019 season following an arrest last July for a misdemeanor after he was arrested for carrying a loaded gun without a license.

“Josh was never suspended from the team — he practiced every day,” Herman said when asked about his status. “Josh was suspended from playing in games, so we’ll determine that when we get closer to a game.”

According to an arrest affidavit, police monitoring downtown Austin on July 5 at the police department’s Real Time Crime Center (RTCC) noticed a man “remove a firearm from his waistband, walk in between two vehicles, appearing to chamber a round by pulling the slide of the gun to the rear, and then place the firearm back into his waistband.