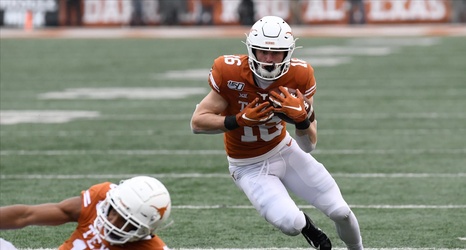 AUSTIN, Texas — Close to two weeks after Texas Longhorns sophomore wide receiver Jake Smith suffered a hamstring injury prior to the season opener against the UTEP Miners, Smith’s status for Saturday’s game against the Texas Tech Red Raiders in Lubbock is still unknown.

During Texas head coach Tom Herman’s Monday media availability, Herman said that Smith is scheduled to start running again in practice on Tuesday or Wednesday, so the team should know more about his potential availability on Wednesday or Thursday.

Smith earned the starting job at the H position during preseason camp after recording 25 catches for 275 yards and six touchdowns as a freshman in 2019.