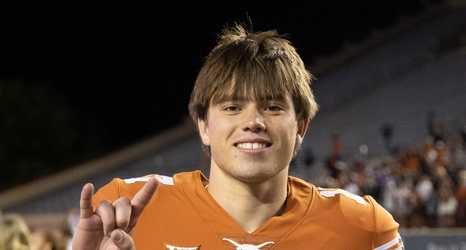 The clutch play of Texas Longhorns sophomore kicker Cameron Dicker continued on Saturday against the Jayhawks, as Dicker hit the game-winning 33-yard field goal as time expired for a 50-48 victory. The kick earned him recognition as the Big 12 Special Teams Player of the Week on Monday.

It’s the third time Dicker has received that honor and the first time this season.

Dicker also made a 39-yard field goal to help set up Texas for the eighth last-second victory in school history. He also had six touchbacks on eight kickoffs and made all six of his extra-point attempts — his 12 points led all Big 12 kickers last week.