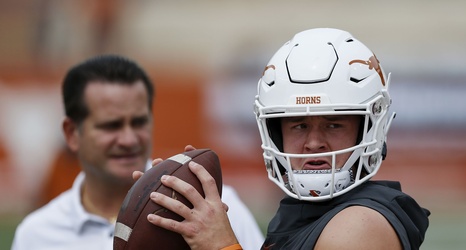 Any on the field role that former Texas football offensive coordinator Tim Beck had is now gone. Head Texas football coach Tom Herman made the move to reportedly demote Beck to a much less significant role within his coaching staff, along with a bevy of other shakeups, on Dec. 1.

Although, Beck wasn’t the only coordinator that lost that position with the Texas Longhorns football program on Dec. 1. Third-year Texas defensive coordinator Todd Orlando was fired early in the afternoon on the same day that Beck was demoted. There was a large outcry from the fan base that sweeping coaching staff changes were needed beyond Herman entering the postseason.