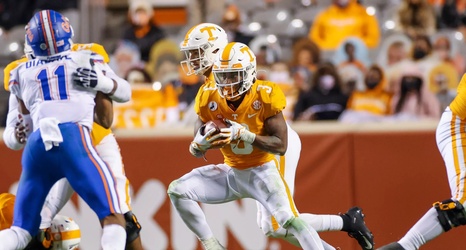 The Texas Longhorns are hosting a top running back transfer on Friday, as former Tennessee Volunteers running back Eric Gray is on the Forty Acres, according to a report from Mike Roach of Horns247.

The Football Brainiacs confirmed the report.

Gray entered the NCAA transfer portal on Wednesday, two days after Tennessee head coach Jeremy Pruitt was fired for cause as the NCAA investigates alleged violations.

A 5’10, 205-pound Tennessee native who was ranked as a top-200 prospect and the nation’s No. 3 all-purpose back in the 2019 recruiting class, according to the 247Sports Composite rankings, Gray emerged as a true freshman with breakout performances late in the season.