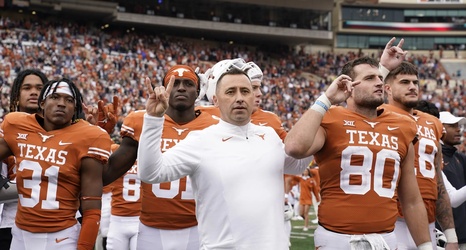 Friday’s win over the Kansas State Wildcats gave the Texas Longhorns a 5-7 record, short of the six wins necessary for bowl eligibility, but with 10 bowl slots still open heading into the final weekend of the regular season, a solid APR for the Longhorns could put them in position to receive an invite.

Even if Texas does receive a bowl invite, however, head coach Steve Sarkisian was non-committal about whether Texas would accept it when asked about the potential scenario following the Kansas State win.

“I’m not big on the hypotheticals as you guys know, but I get it,” said Sarkisian.