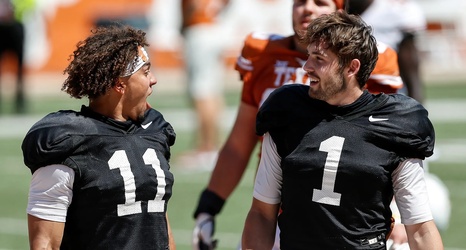 There’s that old cliché saying that goes something like, “if you have two quarterbacks, you have none.”

There was some concern that the saying might prove true for the Texas Longhorns entering the 2021 season, as first-year head coach Steve Sarkisian announced redshirt freshman Hudson Card as his starter, but added that junior Casey Thompson would also play in Texas’ season opener against Louisiana.

Card started and Thompson played, as promised, but it wasn’t reminiscent of Tom Herman’s strategy of alternating series between Shane Buechele and Sam Ehlinger as he tried to solidify a starter, or anything else that could create unnecessary, ongoing controversy around the quarterback position.