Oklahoma rallies late in 4-2 win over No. 8 Texas 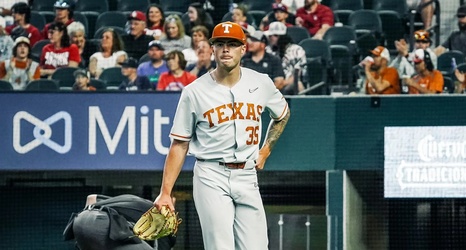 The pitcher’s duel that never materialized on Friday ended up appearing on Saturday instead as the Oklahoma Sooners used a strong start from right-hander David Sandlin and some late scoring to notch a 4-2 victory over the No. 8 Texas Longhorns on Saturday at Globe Life Field in Arlington.

Once again it was the bullpen that struggled for the Longhorns, as right-hander Aaron Nixon allowed two inherited runners to score in the seventh inning, as did right-hander Zane Morehouse in the eighth inning.

And there just weren’t enough clutch hits for Texas, which only had four at bats with a runner in scoring position and failed to come through in any of them.