Inside the Numbers: Texas RB Roschon Johnson sets the tone against Kansas State 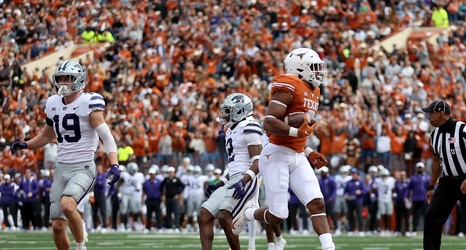 The first season under new Texas Longhorns head coach Steve Sarkisian is over and while the season itself can definitely be classified as a disappointment, the Longhorns at least managed to go out on a win against the Kansas State Wildcats.

It took a team performance and an offensive reinvention from Steve Sarkisian, but Texas managed to put enough together to avoid ending their season losing their seventh-straight game. Running the WildHorn formation for the majority of the game allowed the Texas offense to control the pace of the game and mitigate any issues stemming from Casey Thompson’s injuries.