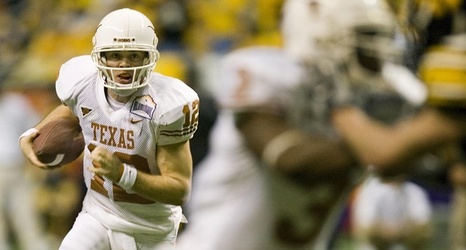 SAN ANTONIO, Texas – Legendary Texas quarterback Colt McCoy (2006-09) will serve as the Longhorns' honorary captain prior to the 2019 Valero Alamo Bowl against No. 11 Utah on Tuesday. McCoy will be joined by former Ute QB Alex Smith, who played at Utah from 2002-04.

McCoy, a redshirt freshman tasked with replacing Vince Young in 2006, led the Longhorns to 10 wins in his first season as a starter, capped by a 26-24 win over Iowa in the Alamo Bowl. In that game, he led the Longhorns out of a 14-0 hole by completing 26-of-40 passes for 308 yards and two scores.