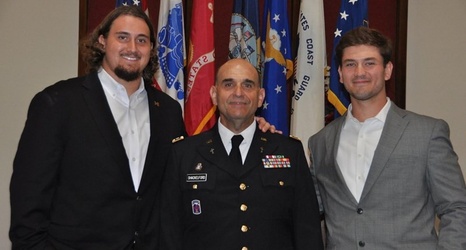 Every year, on or around Veterans Day, The University of Texas community remembers and shows their appreciation for those who served during Veterans Recognition/Salute to the Military game week.

The University has a long-standing tradition of honoring former Texas students and military members. The Football team played its first game inside then-Texas Memorial Stadium on Nov. 8, 1924, a facility the UT student body chose to name in honor of the 198,520 Texans who fought in World War I and the 5,280 who lost their lives. In 1977, the stadium was rededicated to veterans of all wars and renamed Darrell K Royal-Texas Memorial Stadium in 1996 in honor of the Longhorns' legendary coach.