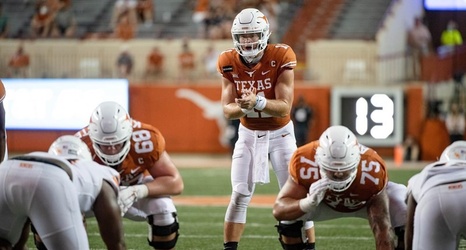 AUSTIN, Texas – Texas Football senior QB Sam Ehlinger was named the Big 12 Offensive Player of the Week, a Manning Award Star of the Week and was selected to the Davey O'Brien Award's Great 8 list on Monday. It is the second time that Ehlinger has received one of the Big 12's weekly honors in his career, and the fourth time he has been featured on the Great 8. The Davey O'Brien Award will announce the National Quarterback of the Week from the eight featured QBs on Wednesday, while the Manning Award will do so for its list on Thursday.