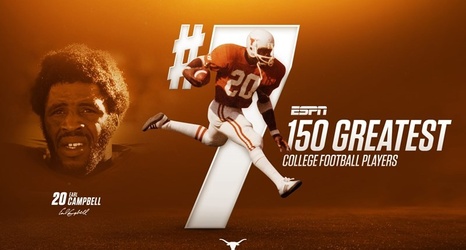 AUSTIN, Texas – Texas Football legend Earl Campbell was named the seventh-best player in college football history by ESPN on Monday night. Campbell is the fifth, and highest ranked, Longhorn named among ESPN's top 150 college football players of all time. That list also features Tommy Nobis (No. 54), Ricky Williams (No. 57), Bobby Layne (No. 75) and Vince Young (No 81), who were all unveiled last week.

Campbell, the famed "Tyler Rose," holds a special place in The University of Texas and state of Texas' football history. As a senior at UT in 1977, Campbell became the first Longhorn to win the Heisman Trophy after he rushed for 1,744 yards – a Southwest Conference record that stood for 16 years – and 19 touchdowns.