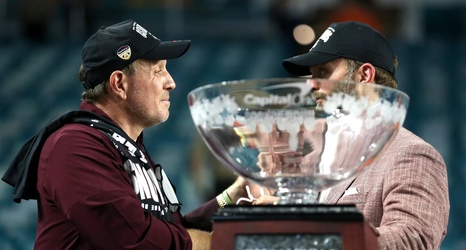 The Texas A&M Aggies’ head honcho, athletic director Ross Bjork, experienced an about face over the weekend in his reaction to the Texas Longhorns potentially joining the SEC.

“The bottom line of where things stand as we sit here today, throughout the weekend, going into next week is we’re ready,” Bjork said, according to the Dallas Morning News. “We’re ready for whatever comes.”

Got to love the sudden change of heart.

Austin American-Statesman: Here’s what we know about the Longhorns possible Big 12 exit

Dallas Morning News: As Texas and Oklahoma’s departure draws near, remaining Big 12 teams must make moves while they can

Dallas Morning News: Would Texas, Oklahoma moving to SEC be a trade of wins for dollars?