Game-By-Game Prediction Of Texas' Record In 2016 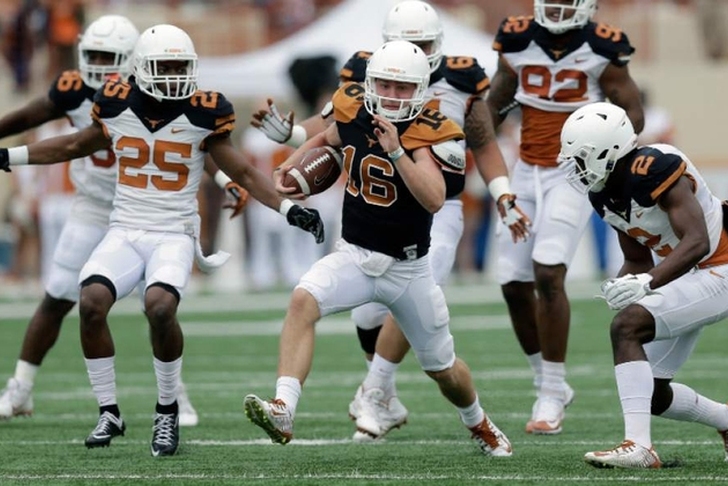 The Texas Longhorns did not play well in 2015. They posted a poor 5-7 record and missed out on a bowl game. They beat Oklahoma, but also lost to Iowa State. Charlie Strong is on the hot seat this year, and needs to have a better season to keep his job. So will 2016 go better than 2015 did? Find out what we think with a game-by-game prediction of Texas football's record in 2016.

Notre Dame is a potential National Championship team, while the Longhorns missed a bowl game last year. While it should be a better effort than last year, the Longhorns aren't winning this one.

This is the first one that's close to a toss up. Cal won the matchup last year, but Jared Goff is gone now. It's in Berkeley, which helps Cal. We'll see how QB Davis Webb plays for Cal, given that he couldn't win the job at Texas Tech. The Longhorns hope that their QB (Shane Buechele?) plays well enough to win. For now, we'll go with Texas, since Cal lost so much on offense.

The Cowboys could be a Top 15 and maybe even Top 10 team when these two teams face off. If this game was later in the year and the Longhorns' offense was more developed (we're assuming Buechele is the starter by this point) it might be a different story. But expect the Cowboys to come out on top.

The Longhorns won last year, but don't expect that to be the case this year. This Sooners team is loaded and could win the College Football Playoff. A loss could increase the temperature on head coach Charlie Strong's seat.

Texas lost to Iowa State last year, but won't do so again this year. This should be an easy win, especially at home.

This is another toss-up game, assuming Kansas State's QBs aren't all injured again. It's a road game for Texas, but they should come out on top.

Texas upset Baylor last year, but Baylor basically didn't have a QB. We were going to give this game to Baylor, but then the Bears fired head coach Art Briles. Playing at home, we'll go with Texas.

This is similar to the Texas Tech game. The Longhorns are at home and that gives them a boost. In theory, Texas could be bowl eligible by this time.

Kansas is really bad. Even if Texas doesn't have six wins by this point, they'll pick up a win against KU.

Here's the only major upset of the year, and one Strong might really need. TCU is a talented team, but by this point in the year, Texas should be playing it's very best football. If Buechele is as gifted as he is hyped, Texas could very well win this one.