The Longhorns Draft Draught Will End Early This Year 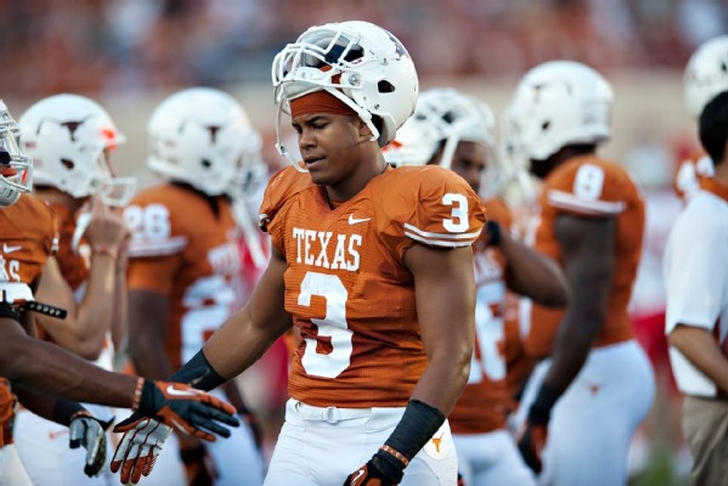 So that didn't last long.

The 2014 draft marked the first time that no Texas Longhorn player was taken in the NFL draft since 1937. That is a 77 year span that shockingly came to an end when Big 12 Defensive Player of the Year, Jackson Jeffcoat was not selected. However, it appears that the Longhorns will be starting another streak this year, and it will not take long for that first player to be drafted.

In a recent big board put out by Andy Staples of Sports Illustrated, Texas has two of the top 40 prospects in the upcoming draft. Junior defensive tackle Malcolm Brown came in at #16 on that board, rated as the no. 2 defensive tackle behind only Florida State's Eddie Goldman. However, Brown is only a junior and while it appears unlikely at this point, he could return for his senior season in Austin. Even if Brown does decide to return, the Longhorns will still be well represented at this years draft. Staples rated senior linebacker Jordan Hicks as the no. 40 prospect in the draft. Hicks could potentially return to Texas for a redshirt year if he chose too, but his spectacular play has minimized this possibility.

“Even if Malcolm Brown returns for his senior year, the Texas draft drought should end with Hicks or defensive end Cedric Reed,” Staples wrote. “Hicks leads the Longhorns in tackles with 136, and 12 of those have gone for a loss. That may look like stat-padding, but the Texas defense has had a lot of plays and make a lot of tackles thanks to a fairly inactive offense.”

While it is yet to be seen how early the one year drought will end, it is clear that at least one if not a few Longhorns will get drafted this year. According to CBS Sports' draft big board, the Texas Longhorns have seven players projected to be taken in the 2015 NFL Draft. This list includes Malcolm Brown (DT), Malcolm Brown (RB), Cedric Reed, Jordan Hicks, Quandre Diggs, Jaxon Shipley, and John Harris. The Texas Longhorns are on their way back to national prominence and their depth at this year's NFL Draft is a strong indicator of how much talent is truly on their roster.