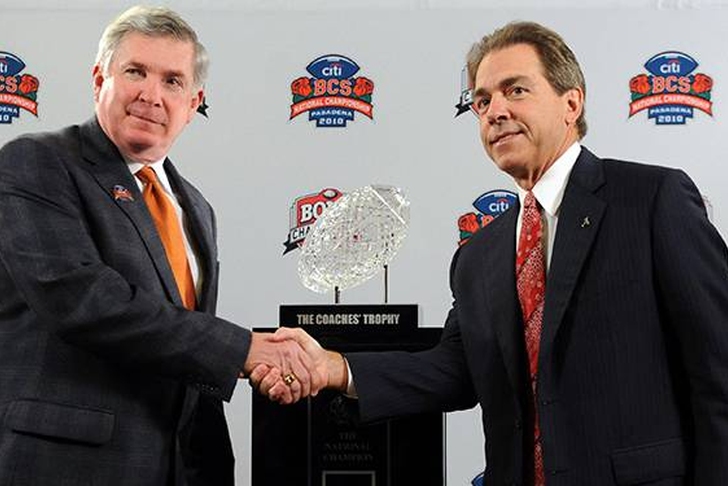 (Above: Mack Brown and Nick Saban exchange a handshake in front of the Coaches' Trophy  at the 2010 BCS National Championship game)

Nick Saban has said multiple times he is “too old” to start a coaching career at a new school, but reports of claims made by his agent to Texas officials last January could hint differently.

Jimmy Sexton, Saban’s agent, reportedly made the comment to former Texas Regent Tom Hicks and current Regent Wallace Hall Jr. that Saban would only consider leaving his current post at Alabama for a job at Texas, according to the Associated Press.

Sexton also reportedly told Hicks and Hall Jr. that Saban’s immense success with the Alabama football program had put him under “special pressure,” a claim that was not further discussed.

Former Regent Hicks outlined the phone call in an email to his brother, current Regent Steve Hicks, which was obtained by the AP through an open records request. ESPN reports that Hicks also detailed the phone call to the Austin American-Statesman in late September.

“Sexton confirmed that UT is the only job Nick would possibly consider leaving Alabama for, and that his success there created special pressure for him,” Hicks wrote in the email.

While Saban has made it clear he plans to stay at Alabama, it is quite interesting he would note to his agent that Texas would be the only other place he could see himself coaching.

And while Texas head coach Mack Brown (who is under contract until 2020) says he plans on staying as well, a recent string of rocky seasons has raised non-stop speculation as to his future with the Longhorns.

Another bit of speculation stems from Texas’ Athletic Director DeLoss Dodds announcing his retirement earlier this year just weeks into the Longhorns' rough start of a season. Brown has produced a turnaround since then (6-2, first in Big 12) but with Coach Brown-supporter Dodds soon out of the mix after 32 years, it is hard to say exactly what will happen next.

What do you think is the future of Brown, the Longhorns and Saban? Leave your thoughts in the comment section below.

Information from the Associated Press was used in this report.