Texas Coaching Rumors: The Hot Board as of Thursday 1/2/14 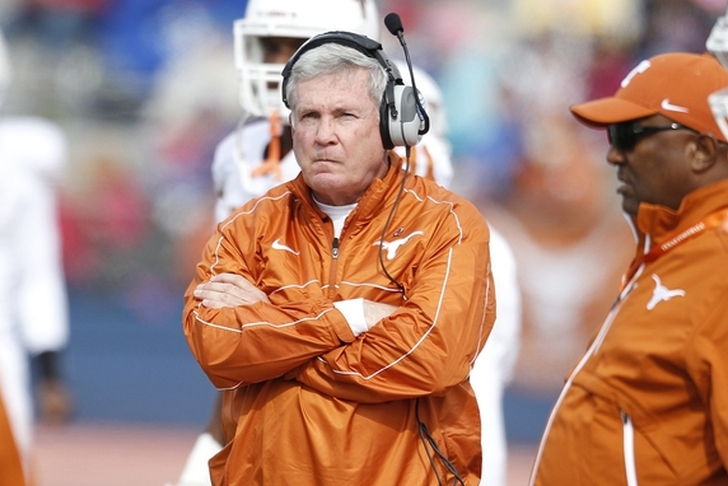 There were some major developments in the Texas coaching search this week, with several top candidates dropping out of the race and others moving up the list. Since we last checked in, here are the major developments that have mixed up the search for Mack Brown's successor in Austin:

- Michigan State's Mark Dantonio has emerged as a dark horse candidate for the position - Texas AD Steve Patterson loves Dantonio's character and style, but he's still a longshot in the race.

- Louisville HC Charlie Strong has officially interviewed for the position, and is considered a "safety candidate" by those close to the search committee. If no one Texas considers a reach candidate pans out, they may turn back to Strong.

- Jimbo Fisher, considered the #1 candidate over the past few weeks, is slipping down the list as uncertainty over his willingness to leave FSU grows. Fisher signed a revised contract earlier this week that improves payouts and incentives for his coaching staff.

Strong has officially interviewed for the job, and while he impressed Steve Patterson, he still hasn't been vetted by the search committee (which reportedly still hasn't officially met), and there are still candidates in the race with better overall resumes. Strong is considered a "safe" choice because he'd definitely take the job if offered, but he's an excellent coach who doesn't deserve to be labeled a consolation prize.

Franklin has also interviewed with Steve Patterson, and while his resume might not jump off the page, he's done remarkably well with Vanderbilt in the country's toughest conference. Franklin is in high demand, and Texas will have to fend off strong interest from Penn State (who Franklin has already reached out to) if they want to land the Pennsylvania native.

Fisher's Seminoles are getting ready for the BCS National Championship game, and he just recently signed a new contract on Tuesday - so why is he still here? Fisher would reportedly still be open to leaving for Texas, but only if they can make an offer that really knocks him off his feet. Fisher is in a great negotiating position, and he's slipping down the list as other candidates appear more realistic.

Harbaugh is the real wild card here. He's reportedly open to leaving for a college job after reaching the NFL's pinnacle last season, and he's been a reach candidate for Texas for some time now. As Harbaugh quietly makes his availability known, he's getting interest from a number of parties, so Texas will have to move quickly if they want to secure his services. With the Ravens out of the playoffs and Harbaugh considering his options, keep a close eye on this situation over the next two weeks.

Briles has everything Texas wants. He's a Texas native who coached high school football in the state for years (he still has numerous connections in the Texas HS football world), and he's a brilliant recruiter who evaluates talent exceptionally well. Briles is expected to interview with Texas in the next few days, and if he doesn't make a rumored move to the Washington Redskins, he's a definite frontrunner.