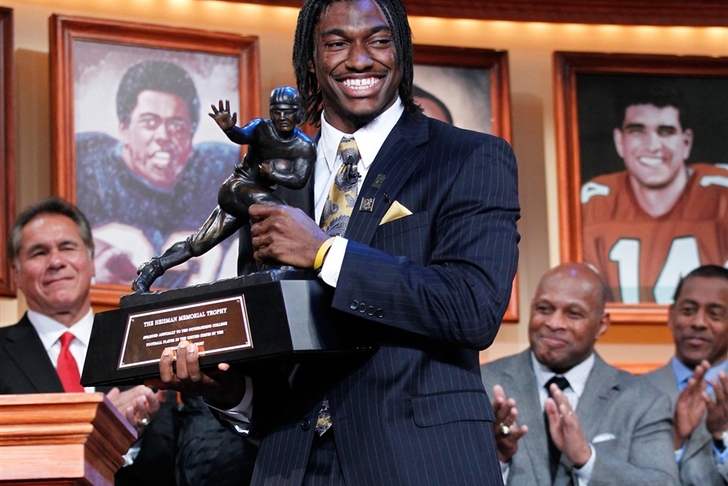 In January 2010, it seemed like all the world was envious of Texas football:

Then, something crazy happened. Four-year starter Colt McCoy was injured in the 1st quarter of the BCS Championship game, and Texas QB play has been borderline awful ever since. The Longhorns experienced Mack Browns's three worst Big 12 seasons in 2010-12, and are in danger of a fourth straight 4+ loss season.

Snead transferred to Ole Miss in 2007 and was a two-year starter for the Rebels.

Stafford was a superstar at Georgia from the day he stepped on campus in the fall of 2006, the same year a wide-eyed RS freshman named Colt McCoy took the reins in Austin. McCoy turned out to be great, but there's no denying that Stafford would have been a legend in Austin, far surpassing McCoy's accomplishments. Stafford led Georgia to a Sugar Bowl victory in the 2007 season, while Texas lost to two unranked teams and ended up in the Holiday Bowl.

Stafford was the #1 pick in the 2009 NFL Draft, and is a star QB for the Detroit Lions.

Chiles had three unspectacular years in Austin, eventually switching to wide receiver in the 2009 season, and never playing again after his third season. Chiles was expected to take over at QB in 2010, according to the Longhorns 'Master Plan', but was a bust at QB.

Mallett was a top-five player in the entire nation, a can't-miss QB prospect and had all the tools you could ever want out of a QB. Mallett ended up going to Michigan for one season before transferring to Arkansas and becoming a star in the '09 and '10 seasons. UT sure could have used him in 2010, when they went 2-6 in the Big 12 while Mallett was dominating in the SEC.

Mallett led the Razorbacks to a BCS bowl game after the 2010 season, and was drafted in the third round of the 2011 NFL Draft. He is currently Tom Brady's backup in New England.

Tannehill starred at rival Texas A&M in one season as a starter in 2011, and was the #8 pick in the 2012 NFL Draft. Tannehill is currently the starting QB for the Miami Dolphins.

Foles played sparingly as a freshman at MSU in 2007, then transferred to Arizona. Foles starred in three seasons as 'Zona QB from 2009-11, eventually getting drafted in the third round of the 2012 NFL Draft.

Foles is currently the starting QB for the Eagles and has 19 TD passes and 0 interceptions this season, one TD away from an NFL record.

Wow. What more can you say about Luck... Possibly the most talented QB in college in 15 years, 2X Heisman runner-up, #1 pick in NFL Draft and NFL superstar in his second season as the Colts QB. Oh, and his dad is a Texas Law School grad....

He also happened to lead Stanford to BCS Bowls in 2010 and 2011, while Texas went a combined 13-12 with a Holiday Bowl win over lowly Cal.

I mean, seriously? You had two generational QB's in your backyard in the same high school class, and the Texas Longhorns didn't land either one.

RG3 has had a ho-hum career... he only won the Heisman Trophy, was #2 pick in the 2012 NFL Draft and led the Redskins to the playoffs as a rookie.

While not as big of a name as Luck or RG3, Thomas was a two-year starter at Oregon in 2010 & 2011, leading the Ducks to back-to-back Pac 12 Championships, the BCS Championship Game (where they lost to Auburn) and a Rose Bowl win over Wisconsin. He went 24-3 as a starter for the Ducks.

Gilbert was supposed to be 'The Truth', and the guy to lead Mack back to glory. Boy, did that backfire. Rumor has it that the Texas coaches though so highly of Gilbert that they passed on taking any QB in the 2008 class, including the three amazing players listed above.

While Petty wasn't a star in high school like some other names on this list, he was good enough to attract major BCS offers. Petty was a Tennessee commit who looked elsewhere when Lane Kiffin took over in Knoxville.

Petty eventually settled on Baylor, but had to 'greyshirt' in 2009 and enroll in school a season late due to a lack of scholarships.

Petty waited his turn behind RG3 and Nick Florence, and was named starter in 2013. Petty led the Bears to a 9-0 start and #4 ranking before losing in Week 10 to Oklahoma State. Petty is the nation's highest-rated passer, and has announced his intention to return for his senior season in 2014. Baylor plays Texas on Saturday.

Wood transferred to Colorado in 2011 after two seasons on the bench in Austin.

Franklin is the starting QB for #5 Missouri, and is playing in the SEC Championship Game this weekend against Auburn.

Ash was the Longhorns' starter in 2012 and the beginning of 2013 before suffering a season-ending injury against BYU in September. Ash has been average at best in his three seasons in Austin.

Manziel is set to be the most famous college QB in history, and may be a one-of-a-kind player that we never see the likes of again. Although his team has underperformed this season, Manziel is already a college football legend.

Johnny Football was the first freshman to win the Heisman in 2012, and is having an amazing year in 2013. Manziel will likely finish in the top 4 in the 2013 Heisman voting.

Brewer transferred to Arizona in July.

While Winston is an outlier on this list, not having gone to high school in Texas, he's here for a reason.

In September 2013, this quote shook the foundation of Texas football:

"If I'd gotten offer from Texas, I'd be going to Texas right now." Winston told ESPN's Brett McMurphy.

For those of you living under a rock, Winston is the QB for #1 Florida State, and will win the Heisman Trophy next weekend.

Lets count that up for you:

That, folks, is what we call the steady decline of a program.