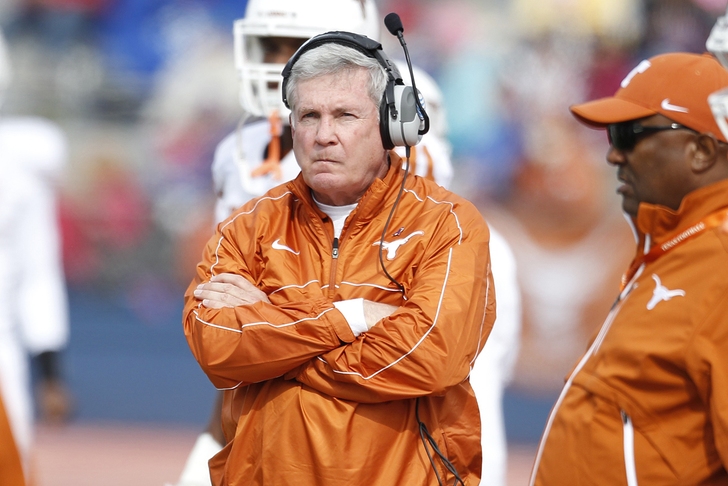 The University of Texas is in a precarious place.

Some would call that place a zone… of danger.

Texas must find a coach to replace Mack Brown, who, despite his recent struggles, is one of the greatest coaches in Texas history. The Longhorns have no coach-in-waiting, as Will Muschamp gave up that distinction to take over at Florida.

The ‘eyes of Texas’ were set on Nick Saban, but he just signed a contract extension at Alabama, so he won’t be the new coach. Or will he? I don’t think so.

Texas is, without a doubt, one of the best jobs in college football. Although the results haven’t been up to par the past few years, everything else is. Texas has the fertile recruiting ground, the funds, the history, the facilities, and is in a power conference. Oh, and this thing called The Longhorn Network.

However, there are problems that Texas faces. Aside from the internal power struggle at Texas, getting a big-name coach the Texas faithful and AD Steve Patterson appear to want is much easier said than done. There is a big ‘but’ for just about every big-name candidate.

Getting a successful NFL coach to leave his job is difficult, especially when the coach’s team is in the playoffs. The odds of luring a current NFL coach to don the burnt orange are not good.

If Texas truly wants a coach with NFL experience, it’ll probably have to settle for a former head coach. Jon Gruden is one possibility, but he appears to enjoy his cushiony ESPN gig and just signed a new contract.

Convincing a college head coach at a major school is going to be a challenge, even if the pockets at Texas are deeper than the Rio Grande. Urban Meyer is at home at Ohio State University. Jimbo Fisher and Guz Malzahn are coaching for a national title. Art Briles just signed a massive contract extension with Baylor. David Shaw seems content at Stanford.

And when was the last time a head coach at a major program left to take another job? Sure, Saban went to Alabama after a stop with the Miami Dolphins, but he wasn’t successful with the Dolphins. I don’t include West Virginia among the nation’s elite, and we all know how Rich Rodriguez did at Michigan.

That means that Texas is far more likely to hire a coach that won’t be as sexy of a hire.

Oklahoma State’s Mike Gundy comes to mind, but he’s no sure bet to leave his alma mater. James Franklin is another name, but he is young and relatively unproven. Still, he’s done wonders with Vanderbilt.

Of all potential hires, Charlie Strong makes the most sense. He has a $5 million buyout, but that won’t be a problem for Texas if it decides Strong is its man. He has proven his ability at Louisville and is the odds-on favorite, but says he has no interest in the job.

Texas has to be careful during its search. This could turn into a University of Tennessee disaster. After Philip Fulmer left, Tennessee went after big names targets, and came away with Lane Kiffin. After Kiffin left, the Vols went after big name targets and got Derek Dooley.

Texas is a far better job than Tennessee was, but the danger is real nonetheless. Texas doesn’t need to make a sexy or big-name hire. It needs to make the right hire. The hire that will get the Horns back to contending for national titles.