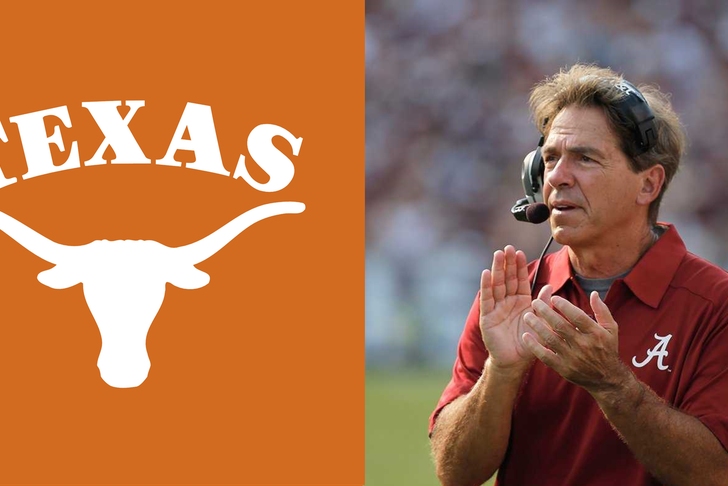 In the days leading up to Mack Brown's resignation, there were a number of reports that Nick Saban would be leaving Alabama to step in for Brown at Texas. While the majority of these reports were just educated guesses, one thing is for certain: Texas was extremely confident that Saban would be their next head coach.

Where did that confidence come from? What made Texas sure Saban was coming to town - so sure that they didn't reach out to other candidates until Saban signed his extension?

In a series of exclusive conversations with several people close to both the Texas and Alabama football programs, we've established a timeline that covers the details of the Longhorns' pursuit of Saban dating back to January 2013. What we found paints a compelling picture of the Saban-to-Texas saga, and shows just how far Texas was willing to go to get their man.

ormer Texas Regent Tom Hicks has a conversation with Saban's agent, Jimmy Sexton, discussing the possibility of Saban leaving Alabama and coming to Texas. At the time, Sexton told Hicks that leaving before the 2013 season was out of the question, but the possibility of Saban leaving after the 2013 season was on the table. Sexton confirmed to Hicks that Texas was the only college job Saban would ever consider leaving Alabama for.

The 2013 season was set up to be a  special one for Saban at Alabama:

- There was the possibility of a three-peat

- It was AJ McCarron's senior season

- Alabama was chasing a fourth National Championship in five years

There was no way Saban was walking away from what looked like a dream season. Still, the conversation between Hicks and Sexton went deeper than previously reported. If Saban was to leave Alabama, Sexton made it clear that Texas would have to do the following:

- Ensure that Mack Brown was on board with the move

- Pay 2x the salary he made at Alabama

- Give him an unlimited payroll budget for assistant coaches

- Offer a 10-year, guaranteed contract -whether he retired or not.

Texas was prepared to meet these conditions, setting up the biggest coaching coup in college football history.

The Texas Board of Regents meets in Austin. Following the meeting, several extremely wealthy donors meet with Regents in a closed-door session to discuss Mack Brown, Texas AD DeLoss Dodds and Nick Saban. Dodds had previously indicated that he would be retiring in the next 1-2 years, giving the Texas administration the chance to effectively wipe the slate clean and start fresh with a new AD and football coach - if they played their cards right.

The Regents and donors left with a plan:

- Dodds would be asked to announce his retirement in the fall, allowing the school to name a new AD prior to the end of the football season

- Nick Saban would be offered a 10-year, $100M contract, a $4M housing allowance, an unlimited coaching salary budget and unlimited use of a private jet for recruiting and personal use

- The plan was to allow Mack Brown to coach through whatever bowl game UT ended up in, then have him step down following the BCS Championship, keeping any heat/speculation off Saban (assuming he was going to be coaching in the game).

Details of the plan were delivered to Sexton, who responded favorably after consulting with his client.

Texas begins the season 1-2, signaling to everyone 'in the know' that Mack Brown is done at Texas. A booster who wished to remain anonymous contacts Sexton, who gives every indication that Saban is on board. However, Sexton is adamant that no leaks to the media can arise, which would putting Saban in an uncomfortable position with his current team.

Soon after, Mack Brown fires defensive coordinator Manny Diaz in a desperate move to save his job (it almost worked, as Texas won their next six games).

Terry returns to Tuscaloosa and gives favorable feedback to her husband, who tells Sexton to begin negotiating a timetable and a contract.

On what might have been the craziest play in college football history, Alabama loses to Auburn, ending Saban's dream of a three-peat.

Following the game, an Alabama booster makes a snide remark to Saban before the Crimson Tide boards the bus back to Tuscaloosa. The comment rubs Saban the wrong way (understandable, given his previous success), which only increases his desire to leave. Our source tells us Saban quickly made up his mind that the loss to Auburn signaled the end of his tenure with the Tide - the perceived lack of appreciation from the Alabama administration was a major factor in his decision to leave.

Texas, meanwhile, is caught in a bind. Mack Brown had turned the Longhorns' season around, and had a real shot at winning the Big 12 - which would be enough to save his job. Seven days later, Texas has a chance to beat Baylor to win the conference (if they get help from Oklahoma).

Confidence: 6 (based on Texas' recent success)

Oklahoma beats Oklahoma State, which gives Texas a shot at the Big 12 championship against Baylor.

Baylor runs away from Texas in the second half, effectively ending Mack Brown's career with the Longhorns, who finish 2013 with an 8-4 record.

Late that night, multiple Texas boosters in the loop get a text message from a member of Saban's inner circle (not Sexton): "Can he step down on Monday so we can announce Nick taking the job on Tuesday?"

Following the game, several Texas Regents and school President Bill Powers meet with Brown, asking him to announce his retirement on Monday. Mack declines and says he deserves another year, considering that the team was one half from an outright championship. This throws an unexpected wrench in the plan.

Texas Regents decide that Mack cannot coach the team in 2014, but cannot agree on a timeline for his removal.

Respected Longhorns writer/insider Chip Brown breaks a story that Mack Brown is stepping down. Brown's article is based on a conversation with someone involved in the process of Mack's removal and Saban's hiring. Saban leaves town to recruit and avoid the inevitable media circus surrounding the announcement.

Texas reaches out to Saban, tells him the decision is made. Saban's handlers are adamant that there can't be a media circus. Mack has to step down quickly so Saban can make the move immediately. Sexton desperately wants to avoid Saban having to publicly deny interest in the Texas job.

Mack denies everything written in the article by Chip Brown, and won't return calls to the Texas administration. The situation turns into a media circus - exactly what Saban hoped to avoid.

Texas makes an offer directly to Saban's agent: $10 years, $100 million with the opportunity to make up to $140M over the 10 years with massive bonuses for National Championships and Heisman Trophy winners. The news is leaked by a UT booster to a reporter for the Fort Worth Star, who breaks the story.

Texas is told that Saban is ready to make the move, but they need Mack to step down and welcome him to Austin at the introductory press conference.

Sexton stresses to Texas that Saban cant hide forever, and they have until Friday morning to announce Mack is stepping down.

Mack finally responds to the Texas AD and Regents: he is not going to resign.

An emergency meeting of the Texas AD, President and prominent boosters is called.

The group is split on Mack Brown's future. Unable to reach a consensus, they inform Saban's people that Texas needs until Monday before they can make a move.

Surrounded by a media circus and frustrated with the broken timetable, Saban signs the contract extension that's been sitting on his desk for five days, then publicly denies any interest in the Texas job.

News is leaked by people close to the situation that Mack Brown is to return as coach in 2014. However, the Texas administration gives Mack an ultimatum: resign tomorrow or be fired Monday.

Knowing Saban has decided to stay, Mack agrees to step down as long as he's offered a lucrative contract as a university administrator, which he is granted.

Saban's people go to radio silence, not responding to any communication from Texas.

Mack Brown steps down, but Nick Saban is no longer in play to succeed him.

Ultimately, the failure came down to how poorly Texas managed Mack Brown's exit. If both sides had been more forthcoming, the situation could have been avoided and Nick Saban could on his way to Austin...but instead, Saban remains in Tuscaloosa and the Longhorns face an uncertain future.